No reviews found...
Add your review

EMOFORM® also contains high concentrations of mineral salts causing plaque formation is prevented, the surface hardened gum, slightly inflamed and bleeding gums is avoided and thus prevent periodontitis. The high concentration of mineral salts also has an inhibitory effect on bacteria growth. Due to the high concentration of inorganic salts in EMOFORM®, the paste is slightly alkaline, which also has an effect on the saliva. This slightly alkaline saliva neutralizes promote the acids formed by the bacteria which are harmful to the teeth and dental caries. The other substances contained in EMOFORM® ensure that teeth and gums cleaned thoroughly, without, however, thereby affecting the enamel layer. 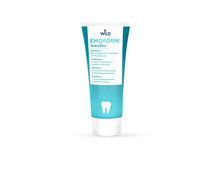